You are here: Home1 > Drew Smith
See all Sermons 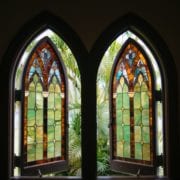 As Southern Baptists from all over the world gather this week in Dallas to discuss the leadership and future of our denomination, it seems worthwhile to reflect on why we are a convention of Baptists, to begin with. What is a Baptist and why be one? Learned minds disagree on the “technical” definition of Baptist, but there are at least two points everyone would admit lie at the heart of Baptist beliefs.

First, we believe that baptism is for those who have already been saved. A key verse on this point is Colossians 2:11-12:

You were also circumcised in him with a circumcision not done with hands, by putting off the body of flesh, in the circumcision of Christ, 12 when you were buried with him in baptism, in which you were also raised with him through faith in the working of God, who raised him from the dead.

In verse eleven, Paul describes the salvation of the Colossians as a circumcision of the heart. But when did this salvation occur? Paul tells us in verse twelve, it occurred when they “were buried with him in baptism” and “raised with him through faith.” In other words, Paul links baptism, here, with salvation and faith in Jesus Christ. All these events go together, they are part of the same package. Baptism does not come before salvation, it goes along with it.

Second, we believe that baptism is a symbol and declaration of salvation not a part of it. Admittedly, Paul is not to totally clear in Colossians 2:11-12 on just how baptism and salvation fit together. Someone could easily read this passage as saying that baptism is a part of the salvation process. Thankfully, we have a lot more Bible to help us fill in the details. Here are two examples in the New Testament where salvation and baptism are clearly separated. First, Acts 10:44-48:

While Peter was still speaking these words, the Holy Spirit came down on all those who heard the message. 45 The circumcised believers who had come with Peter were amazed because the gift of the Holy Spirit had been poured out even on the Gentiles. 46 For they heard them speaking in other tongues and declaring the greatness of God. Then Peter responded, 47 “Can anyone withhold water and prevent these people from being baptized, who have received the Holy Spirit just as we have?” 48 He commanded them to be baptized in the name of Jesus Christ. Then they asked him to stay for a few days.

Another passage that makes this point is Luke 23:42-43. One of the criminals who was crucified with Jesus turns to Him and says, “Jesus, remember me when you come into your kingdom.” Jesus replies, “Truly I tell you, today you will be with me in paradise.” So here we have Jesus promising someone they would be with him in heaven who was never baptized.

Baptism, therefore, is not a part of salvation; however, that does not mean baptism is unimportant. To begin with, Jesus commands all believers to be baptized (Mt 28:18-20). In fact, if we look back at Colossians 2:11-12, Paul considers baptism and salvation so closely linked, he doesn’t even bother to separate the two in his discussion. But what makes baptism so important? In baptism we act out, publicly, the great salvation we have in Jesus (Rm 6:1-11). It is a declaration to the world that we are “buried with him in death, and raised to walk in newness of life.”

Another belief that distinguishes us as Baptist is our views on the Lord’s Supper. On a basic level, as Baptist, we believe that the Lord’s Supper is a symbolic, commemorative act in which we reflect back on the death of Jesus and look forward to His return (1 Cor 11:23-26).

Almost no one, though, would disagree with us on that point. The bigger issue is whether something more happens during the Lord’s Supper. The debate centers around what Jesus meant when he says, “I am the bread of life” in John 6. Some have been inclined to think that Jesus meant he is literally the bread. If we read the passage this way, the Lord’s Supper would be much more than a symbol. Somehow, the bread and the drink would be transformed into the body and blood of Jesus.

On the one hand, it is not hard to see why people would understand this passage in that way. After all, what else could Jesus mean by “I am the bread” besides “I am the bread.” On the other hand, there are at least two reasons why we should not take Jesus words as literally applying to the Lord’s Supper. First, if we assume that every time Jesus says “I am _____” he means that he is literary ____, we wind up in a bit of trouble later on in John. For instance, Jesus says at one point, “I am the true vine, and my Father is the gardener“ (Jn 15:1). Should we take this to mean Jesus is actually a vine and God the father is actually a gardener? Obviously not. But if Jesus can speak metaphorically in John 15 why not in John 6? Second, it is not clear that Jesus is talking about the Lord’s Supper at all in this passage. As the great John scholar Dr. Bill Cook once wrote, “It is better to understand Jesus as referring to the same ideas as are brought out earlier in the discourse: to personally receiving Him.”

There are many more things we believe as Christians, and there are many points on which Baptist can and do disagree, but on these two points, at least Baptists find their common ground.

https://naobc.org/wp-content/uploads/2018/06/stephanie-krist-350955-unsplash.jpg-scaled.jpeg 1709 2560 Drew Smith https://naobc.org/wp-content/uploads/2016/12/blue-logo.png Drew Smith2018-06-13 22:48:212022-10-11 08:20:45Why We’re Baptists
We use cookies on our website to give you the most relevant experience by remembering your preferences and repeat visits. By clicking “Accept”, you consent to the use of ALL the cookies.
We will not sell your personal information.
Cookie settingsACCEPT
Manage consent

This website uses cookies to improve your experience while you navigate through the website. Out of these, the cookies that are categorized as necessary are stored on your browser as they are essential for the working of basic functionalities of the website. We also use third-party cookies that help us analyze and understand how you use this website. These cookies will be stored in your browser only with your consent. You also have the option to opt-out of these cookies. But opting out of some of these cookies may affect your browsing experience.
Necessary Always Enabled
Necessary cookies are absolutely essential for the website to function properly. This category only includes cookies that ensures basic functionalities and security features of the website. These cookies do not store any personal information.
Non-necessary
Any cookies that may not be particularly necessary for the website to function and is used specifically to collect user personal data via analytics, ads, other embedded contents are termed as non-necessary cookies. It is mandatory to procure user consent prior to running these cookies on your website.
SAVE & ACCEPT
Scroll to top